A couple of weeks ago (9th October to be exact) we celebrated Ada Lovelace Day, so it only feels right we should give a shout out to the fascinating character and infamous mathematician that is Ada.

Ada Lovelace Day was founded in 2009 by Suw Charman-Anderson and was created to recognise the achievements of women in STEM and to raise the profile of females working in the areas.

Born in 1815, Ada Lovelace (1815-1852) is best known for her computing work alongside Charles Babbage (1791-1871), and for being the daughter of famous and eccentric poet, Lord Byron. Ada’s mother, Lady Anne Isabella Milbanke Byron, was a highly educated woman and set out to make sure Ada would become the same. Lady Milbanke pressed mathematics and science upon Ada in the hope she would not develop her father’s unpredictable and somewhat wild nature. Ada thrived in these subjects, (even though they were considered male specialties at the time) and it was here that it became clear she possessed a unique aptitude for numbers and language.

Young computing pioneer, Ada, first began to demonstrate her potential at the age of thirteen when she became obsessed with the concept of flight. So much so that her interest led her to design and build a mechanical bird that could flap its wings.

In 1833, When Ada was just 17, she attended a party with her mathematics tutor, science writer, and polymath Mary Somerville, by special invitation only. This gathering, full of academics and the like, opened Ada’s eyes to a world of possibility. It was here she met Charles Babbage, a like-minded mathematician, and inventor. He introduced her to his latest creation, “The Difference Engine” – the most complex and pioneering calculator ever designed. Ada was entranced with the machine and it was here her friendship with Babbage was formed. 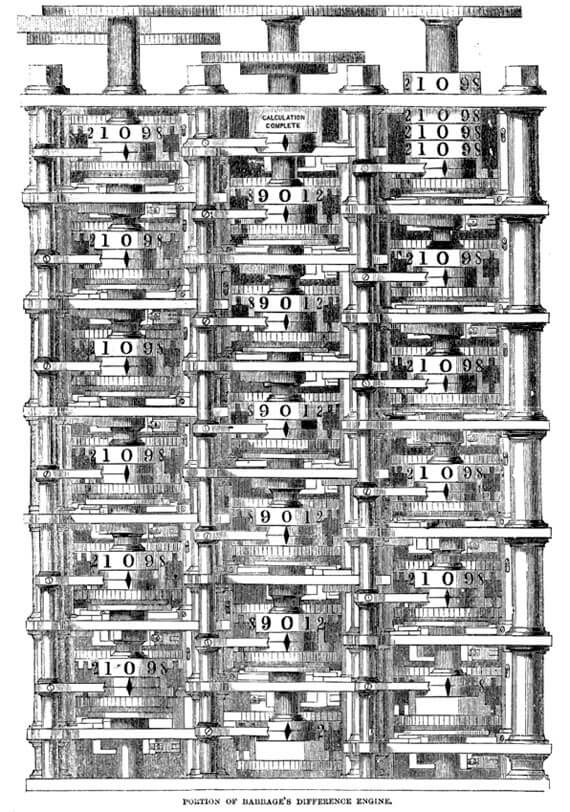 Where Charles proposed the idea of The Analytical Engine to crunch numbers (so to speak), Ada saw it as having the potential to do so much more. She believed it had the capability to create music and saw a way of replacing numbers with symbols and developing it further. Ada, mathematician and ‘student’ of Charles Babbage for ten years was becoming a visionary.

Babbage’s partly built machine comprised of four components, the mill, the store, the reader and the printer. The mill did the calculating and the store was where data was held. Not too much of a far cry from the concept of today’s computers really. The numbers were entered into the reader using an old kind of punching card. Ada likened the engine to the old Jacquard sewing loom, which was the first machine to be programmed to perform autonomously, using binary code.

Babbage, a Cambridge mathematics professor, was very much an engineer in that he designed and began to build the hardware and mechanics for his super-duper brass calculator (apologies, The Analytical Engine). Whereas Ada is believed to have worked on the software and programming side of things, having translated (and then some) Italian engineer, Luigi Menabrea’s account of the engine. Ada’s elaborate set of notes contained a section she referred to as ‘Note G’ in which she describes an algorithm for the engine to compute a set of specific numbers, the Bernoulli numbers. It is this appendix that led Ada to be considered as the first published computer programmer.

Babbage is considered the ‘Father of the Computer’ by some (read – many people on the internet) and he was said to have referred to Ada as an ‘Enchantress of numbers’, a winning combination! Ada had creativity in her bloody and science in her heart, she was unstoppable! She was remarkable in that she had the foresight to imagine what could be. She understood Babbage’s creation and the potential for it to go further, despite living a century before the creation of the first modern computer (talk about being ahead of the curve!!)

Ada sadly died at the young age of 36, the same age as her eccentric father Lord Byron. Her last years of life were somewhat troubled but it’s nice to think about what Ada could have created, developed or invented alongside her scientific and mathematical counterparts, should her pioneering young life not been cut short.

Ada Lovelace may have lived a short life but what an important and inspiring one it was.

“That brain of mine is something more than merely mortal; as time will show” – Ada Lovelace